Jos Loobuyck was only 12-years old when he started racing pigeons. He lived in Merkem, a little village close to Diksmuide. His first pigeons came from his uncle Julien Maes. In 1958 Jos married his wife and after some years in the Congo, he started working in Belgium in Otegem. With pigeons from Jacques Catteeuw he managed to get good results till Dourdan.

In 1966  the family Loobuyck moved to Aalter because the company where Jos was employed as a chemist Jos moved there as well. In Aalter Jos and Marie-Antoinette raised their four children: Els, Ann, Jan and Wim. After some months Jos had built a loft to race pigeons again. Son Jan was always busy on the lofts as from an early age. In the following years Jan helped his father and gained a lot of experience how to race pigeons. In the 70’s Jos & Jan competed on short and middle long distance with promising results. In the 80’s pigeons from Jos’ uncle Julien Maes reinforced the loft together with pigeons from Marc Segers, Raoul Verstraete, Albert Jolie, André Perreman and Daniël Vanceulebroeck. Out of this pigeons Jos & Jan bred ‘The golden couple’. This couple was the start of a blooming career on the long distance. Direct descendants of this couple flew 1st Bourges (2nd National), 1st interprovincial Angoulème, 1st Cahors, 1st Montauban (6th National), 1st Dax, etc.  A daughter of these two excellent breeders was coupled with the blue Dereere (race Coutteau), a pigeon they got from De Beule-Gillis. That is how Jos & Jan found a second golden breeders couple. They were the parents of the double 1st national Perigueux, 2nd international Marseille, 1st Dax, etc

Jos & Jan managed to keep their national winner ‘The Perigueux’ and this pigeon gave some fantastic offspring. Especially in the second and third generation. Coupled with the race of Chris Hebberecht, Hendrik Mortier and Van Damme-Boddaert. A grandson of the Perigueux would have won the 1st national Bordeaux if the gummi wouldn’t have been timed too late. A direct son of the 5th national Bordeaux or a greatgrandson of the Perigueux won the 1st national ace-pigeon long distance in 2016! In 2009 Jens, the son of Jan, joined the team and helps where he can.

A cock from Alfons Hoste (race Vandenabeele) formed together with a granddaughter of the Perigueux another excellent couple. Their sons won 1st national Montauban, 3th national Montauban, 19th national St Vincent, etc. Jos & Jan have bred together with several other renown fanciers. In 2017 they won the 1st national Jarnac with a pigeon who was breeded in cooperation with Davy Verleije. 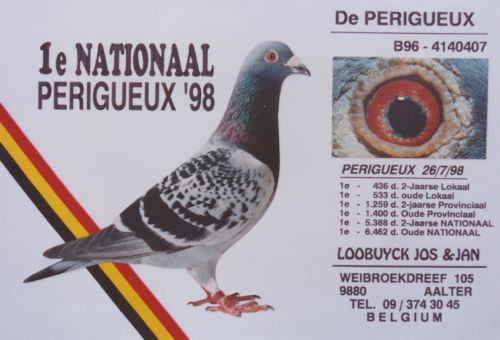 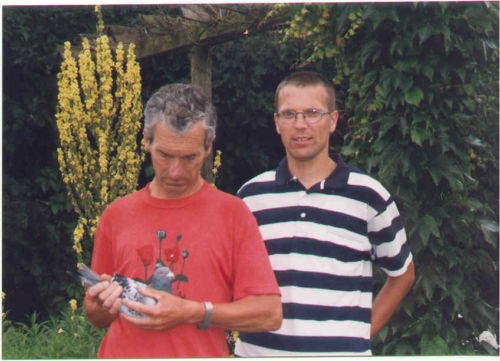